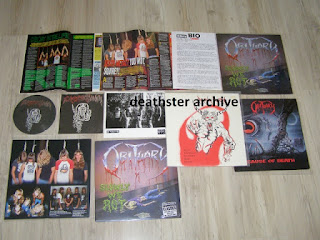 Holy crap its HEAVY here. I just love Obituary "Slowly we rot" album (and everything they did between 1986-89). This album changed a lot when I heard it first time in 1990. Death Metal at its best!
On the picture: some magazines featuring early Obituary, Roadrunner press kit for "Slowly we Rot", Obituary "Slowly We Rot" LP 1989, Executioner "Metal up your ass" PicEP (bootleg), Executioner "Metal up your ass" EP 1985, Obituary promo photo (1989), compilation album "Raging Death" (1987) featuring Xecutioner tracks "Find the Arise" and "Like the Dead" (death metal at its best!), Obituary "Cause of Death" LP 1990 (some 3-4 good tracks, otherwise let-down!), Obituary "Slowly we Rot" LP re-issue.
Posted by deathster at 5:58 PM