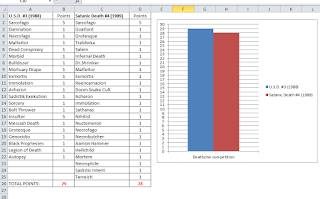 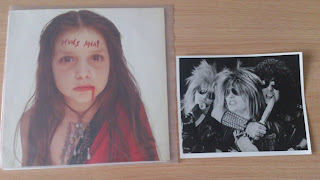 Black Metal from 1987. When most of thrashy side of metal bands had turned back to their occult background, another infernal quartet from UK called Deliverance released their debut album. The cover of the album is also pretty sick.


"For every copy sold is another soul bought"
Posted by deathster at 3:04 PM No comments: 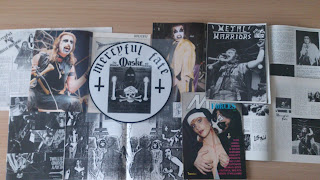 Sometimes bootleg looks better... bootleg of bootleg I mean. Many of us have heard horror stories about the price of "Die Schwarze Maske..." LP by Mercyful Fate. Well, this PicLP version costs usually ca 10 times less and looks even more killer (and I do not want to hear stories like PicLP sounds worse than black wax, its still better than x-th generation copies on tape I listened 25 years ago). Cool stuff!
Posted by deathster at 2:45 PM No comments:

Home taping is killing music... so is Venom (off topic) 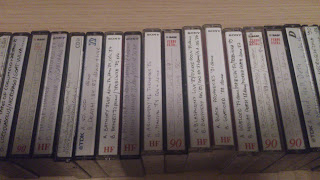 Posted by deathster at 10:06 PM No comments:

At the end of 2004 I had a chance to do some research with Mike Browning  via email. About the ancient days of Morbid Angel and Incubus. It was not meant to be interview or anything, just to find aout some details. So here I copy-paste Mike answers 1-to-1. Maybe it will clear some things up for maniacs.

Mike here. It's great to hear from people that liked all the stuff I did from back then!!! About the old pictures, pretty much all the old stuff I had was either put on the website or is the stuff you mentioned you saw already. Unfortunately I don't have much more than that anymore. What I will do is if I find more stuff than I will put it up on my website and that stuff will always be available for anyone to take it right off the site. Right now I don't have a scanner anymore, but I do plan on getting a new printer/scanner very soon.

INCUBUS
About the Incubus recording, the band was only together less than 6 months and we had no PA to have vocals with anyway so Sterling never sang when we practiced and we never even got the chance to play even one show either. So Gino and I never heard Sterling sing until we got into the studio.
About Killjoy singing for Nocturnus (actually I asked about Killjoy doing vocal duties in Morbid Angel anno 1985/86 - 2013) I have heard this rumour before, but no he never tried out singing for Nocturnus. By the way that picture of me with the Morbid Angel banner in back of me was actually an old Black Sabbath banner and we painted over the Black Sabbath with Morbid Angel! (Just a little funny history for you) 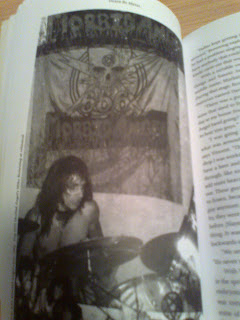 It would be cool to see a Morbid DVD from the old shows, but you would have to ask them about that one, I don't want to get sued for releasing something like that!!! I guess old Evil D is back with Morbid and of
course it's all about the money and I hope people will see through it to the truth. Maybe David will wear his pink spandex from the Genitorturers band on stage with Morbid!HEEHEHEE True Occult Metal Rules!!!
Some of the best songs...
Actually “Hellspawn” and “Demonseed” were 2 that I wrote the lyrics for back then! Although Trey usually did most of the lyrics. I am not sure about the Incubus, but I heard that Sterling did record a  demo later on, so this might be it, but I never have found a copy though myself. The Morbid (Angel) demo you were talking about never had a title because we never had decided to release it. Is it the one with the high King Diamond type vocals? If this is the one you were talking about, we didn't really like the way it turned out with the vocal style and that's when Dallas started singing. He eventually got into trouble with the law and went to jail, so we ended up replacing him with John Ortega who played bass on the “Abominations…” recording, which really was Morbid Angel's first album although Trey won't admit to it!!! Let me know if you have a copy of that Incubus demo I would like to hear it sometime! (Its about this “Speaking Satanic Poems” demo from 1989- 2013)
Yes, "the Beginning" was the only real demo we ever recorded, so that other thing may just be a rehearsal tape made on a jambox. We never owned a 4 track back then (actually I meant 4 track 1986 demo or rehearsal- 2013), although I wish we had gotten one because there would have been a lot more stuff recorded!!! The bonus hidden track at the end of "The Beginning" was actually from a band Dallas had after he was in Morbid Angel. It wasn't supposed to be on that CD but it never got removed when the CD was made so it ended up on there! And caused quite a bit of confusion as to what it actually was!!!

Yes, Sterling had Incubus before he joined Morbid Angel in 1986. So when the band split in half we got Gino and reformed Incubus again. And  Vincent had a band Barren Cemetary (not sure on the spelling of Barren or Baron?) and he had Skelletor from Hallows Eve playing guitar, but when Skelletor quit he wanted Trey, but Trey wouldn't give up Morbid, so Davids band became Morbid Angel. And Skelletor and Sterling were friends, that's how David told us about Sterling and that's how he endedup in Morbid Angel.

Album cover for “Abominations…”
We never got far enough into the situation to decide on a cover for “Abominatios…”, but Trey had a weird painting some old girlfriend of his did and we were probably going to use that. But I have never seen it used for anything, so I don't know whatever happened to it? The only release that was "official" was the regular Earache one that had the grey cover with just the logo, I never knew about any black box with a patch or any others, but there could have been. I heard about a white blood splattered vinyl of “The Key” as well, but never got the chance to even see one!!! Oh Well!!!

Abominations boxset...
Cool, stuff for sure! I never saw the MA box, is that what the "Abominations..." CD with the picture on it is from? If you ever run across another one of those box sets or the glow in the dark LP let me know, I will gladly pay your for getting me one!!! I would say the rough version of “Abominations…” probably came from the bootlegs John Ortega was selling after he was fired and replaced by Sterling. I know he had a copy from the studio before it was mastered and he was selling it and that's how it originally got out to the public!

1982…-
Ice was the very first band Trey and I did even before Dallas, when we were in high school and I do believe I have one or maybe two pictures of us playing at a high school talent show in 1982!!! Then when Trey
hooked up with Dallas we changed the name to Heretic, but we found out that there was already a band called Heretic, so Trey came up with the Morbid Angel name. Actually a guy named Scott was who designed the MA logo, but Trey never gave him a penny or any credit for it! Nice guy huh!!! Scott also redid the Nocturnus logo that was on Thresholds. Have you seen the new book Choosing Death? It has a whole story on Morbid Angel and some old photos including one from the Heretic days. You should really get that book!!!
I read the MA story (from an old biosheet - 2013) and it was actually wrong about Sterling, he joined AFTER we recorded “Abominations…” not before. So it was John Ortega that played on “Abominations…”. Actually after the recording David Vincent said Ortega was not good enough to play in the band so we fired him and it was Vincent who knew Sterling and got him to play bass for us. We did one show with Sterling that to my knowledge unfortunately never got recorded (but I think I have seen it, hmm, check live in Brandon 20.04.1986 on Youtube. And if you are there then better check 26.05.1986 live as well...aarrgghhhhh... -2013) and then I caught Trey kissing my girlfriend and beat his ass really bad and that was the end of me being in Morbid Angel. The band split in half and Richard and Trey joined with Vincent and the others and Sterling and I got Gino and reformed Incubus. Besides from that demo with Kenny,the King Diamond type singer, we never recorded anything in a studio. So the 4 song demo is also a myth. We did send Vincent and Goreque a practice tape made from a jam box (portable tape player) and that's how we got signed. Even on the official Morbid Angel website Trey calls “Abominations…” a demo which is clearly a lie and an insult to all of M.A.'s fans who know the real truth!
Hail Thyself!!!
Posted by deathster at 1:56 PM No comments: