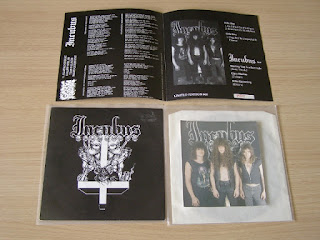 When I say Incubus is one of my fave stuff then I mean Incubus from Florida (a black metal band from 1987 featuring ex-Morbid Angel members). If I say Majesty is godly then I mean bestial vomiting Majesty from 1986/87 (deathcore band with Master vibes). If we discuss about Archenemy then its about raw speedcore band from 1986. I just love Darkness stuff (here I mean Darkness L.A. which was active 1987/88). Yeah and Necrophagia was cool (I mean the band from Ohio) and so on and so on. With Tormentor I have to say I prefer German (pre- Kreator) and Hungarian band to other tormentors out there. Actually I wanted to say few things about Incubus (Florida). Unfortunately they recorded just one 3-track demo in 1987. But then again what a killer demo it is. With 3 ultra sick, fast and demented tracks you just can not go wrong. Besides the sweet music I just love the way microphone is handled. It really is one of the best extreme metal ever recorded. Thank you for the music, Incubus!

Its funny to hear some of the Incubus riffs in Morbid Angel 1986 rehearsal recordings, no wonder because Sterling Von Scarborough had Incubus already before joining to Morbid Angel in 1986 and later he reformed the band with Mike Browning in 1987.
On the picture: Incubus demo 1987 pressed onto 7" EP (two different versions, one being with gatefold cover and handumbered to 666 copies) and promo photo.
Posted by deathster at 11:21 PM