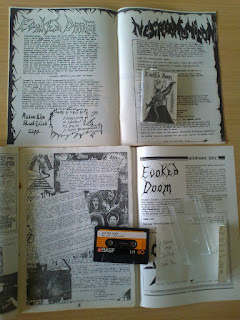 Evoked Doom was legendary deathcore act from Southern Germany. Musically rather primitive stuff with drum maschine, but hey - its from 1985/86, so what do you expect? Blackthorn magazine would call them Baby Metal but to us, deathheads, it does not count!
Yes, there are two demos on the picture. One was sent to Decibel Of Death (Fra), second was sent to Damage Inc (Nor). The latter one has also message to editor Maniac (who later did some vocal duties in Mayhem) and also rehearsal (besides the 1986 demo).
Posted by deathster at 9:03 PM