I have always thought that singer is very important part in a band. Its like an extra instrument besides bulldozer-like bass, chainsaw guitar and hellhammering drums. So if a singer is not good (or I do not like it) then it ruins a lot in my case. And it does not matter if I do not get what he is saying (as long as I know its about death, woe and black magic), maybe its typical for people whose mother language is not English. I mean this is how I listened to Metal also as a kid, without understanding a word (what Hetfield, Dickinson, Araya or Kiske said I did not care, I just loved the voice).
Here are fave Metal shouters (in no particular order):
- John Tardy (on Xecutioner and 1st Obituary LP)
- Pelle "Dead" Ohlin (in Mayhem and Morbid)
- Quorthon (Bathory)
- Zeev (old Salem recordings)
- King Diamond (especially old Mercyful Fate stuff)
- Messiah Marcolin (on "Nightfall" album)
- Glen Danzig (especially old Misfits, not so metal I hear)
- Robert Lowe (up from 1994 till present)
- Cronos (especially on "Die Hard" sessions)
- Chuck "Evil" Schuldiner (only on "Infernal Death" demo)

Sure there are more names but I found them to be deviations from or good shadows of masters. Yeah one could say that Dead and Quorthon sound almost the same... ah what the hell. 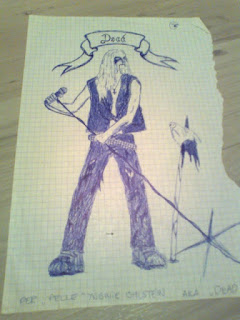