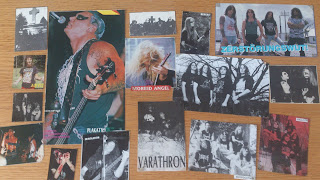 Some cut-out pictures from magazines. Who cared to preserve them over 20 years ago? Cool pictures from cool bands were cut out immediately.

NB! Anvil picture is my first ever cut-out picture from 1987 or so. It was quite expensive to afford such small picture back then. Kind of black market stuff that was not available publicly. Yeah, very important information for you to read, ha ha.

Posted by deathster at 7:07 PM No comments:

Effigy of the Forgotten 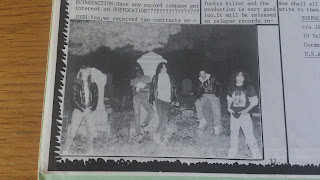 Holy hell I love "Effigy of the Forgotten" album by Suffocation. Brutal Death Metal (although I am not so fond of this word combination) from New York from 1991. This was so new and un-heard when it was originally released (at least for me). I think they brought something new to Death Metal back then and many new bands started to copy them. But we can not blame Suffocation for influencing so many new bands (same case with Venom, Bathory, Kreator, Slayer and their countless copycats, so many boring imitators). Corpse Molestation / Bestial Warlust have used this Suffocation influence interesting way I think. Anyway, late Summer / Autumn 1991 brought also other good albums from New York: "Dawn Of Possession" and "Butchered At Birth" (just put this song "Innards Decay" at max volume on your headphones and say it is not good stuff, I can not believe you then!). This is/was the peak for so called Brutal Death Metal.

"How can you cry when someone dies? The Lord will greet him."
Suffocation `91
Posted by deathster at 7:01 PM 1 comment: