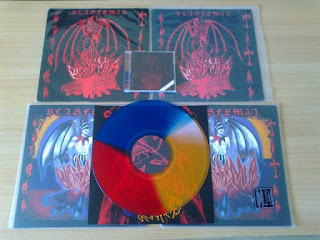 What a monster of an album this "Guerra Total" by Blasfemia is. Unbelievable stuff. Originally released independently in 1988 in Colombia. Not many people in Europe knew about this release 20 years ago. I myself discovered them accidentally (blind purchase for 30DEM from BYH festival in Germany 2001). And I heard the music 2 months later, after I had returned home where I had record player and I was not dissapointed at all. What a feast for death metal maniacs ears it is. Crude, raw and right into your face. Some guys played also on Parabellum recordings.
On the picture: "Guerra Total" two original vinyl pressings (black/red covers, out of two copies I got perfect platter: better cover from one and better vinyl from another), CD re-issue and two LP re-issues (with colored cover: black vinyl and colored vinyl).
Posted by deathster at 11:43 PM