For some reason I am totally obsessed by ancient black and death metal bands. The more noisy, satanic and rotten they are, the better. Especially the 1987-90 period is very interesting for black metal as it was literally dead back then. First black metal wave (ca 1984-85) had died out. Satanic bands got ridiculed in press and some older satanic/death bands turned to more technical thrash/speed direction ("look we can play also"). But luckily some die-hard Venom/Bathory/Sodom freax continued to produce further our beloved deathnoise and the spirit still lives on.
But do not forget its music we deal with here. Enjoy it or hate it, its just a music. 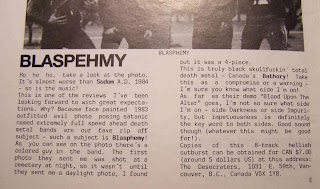 Blasphemy demo review ca 1989
NB: Also deathcore meaning today is totally different from its meaning lets say from mid-to-late 80s. In the 80s deathcore was the fastest and the craziest form of extreme music... the best sample would be Necrophagia demos in years 1984-86.
Posted by deathster at 6:09 PM