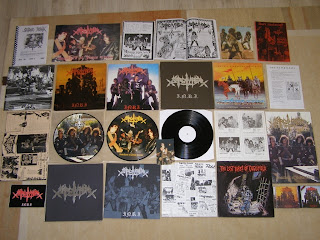 Yeah, I just love old Sarcofago. Its truely one of my all time faves! I have to admit that I discovered their brilliance relatively late. I heard about Sarcofago around 1990/91 but at that time it was just one band among others (with their "Rotting" LP via tapetrading, and no I had not seen sexual maniac trousers pictures yet). It was in 1995 when I ordered "INRI" album from Osmose Productions and damn I was positively surprised. I expected some noise a la Blasphemy/Beherit (the bands I already loved and I had read that "INRI" had huge influence on them). But Sarcofago was more controlled than I expected and... damn great. Sound, riffs, drumming (it reminded me "De Mysteriis Dom Sathanas" drumming) and those disgusting vocals. Excellent! Also their pictures looked nice for Black/Death Metal bands... tons of spikes, bulletbelts, facepaint etc etc. And it was done in Brazil anno 1987! So Sarcofago reigns my Black/Death Metal throne ever since. And then I started to discover other similar (but still shadow) acts from Brazil (Holocausto, Sextrash, Expulser, Impurity etc etc).
On the picture (only official albums, I do not support bootlegs business around Sarcofago. I do not need every (shitty) release with Sarcofago logo on it. I find only one bootleg worthy: "Desecration of demos" LP. Its not on the picture because this picture was done January 2008 and that bootleg came out around year or two ago):
"INRI" LP (1987), "INRI" re-issue LP (2000), "Warfare Noise I" compilation LP (1986), "INRI" re-issue PicLP (2004), "INRI" re-issue PicLP die-hard version (2004), "INRI" re-issue testpress (2004), "Lost Tapes of Cogumelo" compilation LP (1990), "INRI" CD (1992) and "INRI" re-issue CD.
Posted by deathster at 9:38 AM