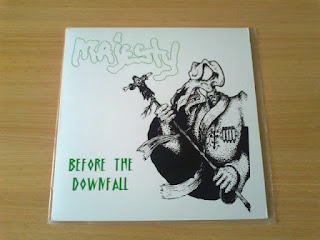 This kind of bootlegs I support (if they refuse to make it officially). Ancient rotten death bands stuff re-issued on vinyl. This one here is legendary Majesty from USA who unleashed two deathcore demos around 1987: "Bestial Vomit" and Demo II. Musically its in the Master/Deathstrike vein, but maybe even more extreme. Later some guys continued their activities in Nausea.
So now I am expecting some other similar releases from forgotten bands: Mortuary "Mortal Remains" demo 1986, Darkness (L.A.) recordings 1987/88, Rotting Fetus 1986, Dead (Florida) demo 1986 etc etc.
Posted by deathster at 11:28 AM