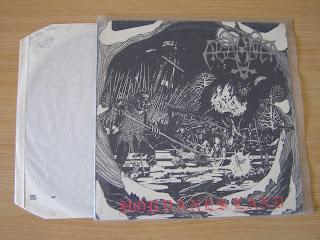 What a great mini album by Norwegian Enslaved. This one brings back memories from Summer 1993 (along with "Under A Funeral Moon"). When "Vikinligr Veldi" was released in Spring 1994 I was very dissapointed in it and I kind of turned back to the band . I just thought that they never top "Hordanes Land" (those sick vokills). It seems this particular copy of the album was sent to Mr. Mutilator from Earl Grutle. 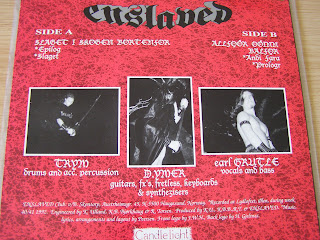 The back cover was also very magical and added mysticism to the band. Especially the guy in the middle.
Posted by deathster at 4:36 PM