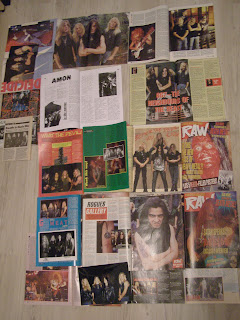 I think every teenager extreme metal fan found Deicide very interesting anno 1990/91. They were called like "Reign in Blood" of 90`s during the debut album time (1990). They were from Florida - the death metal centre (it was compliment at that time (which changed unfortunately very soon)). For some reason I liked American bands more than European bands at that time (Deicide, Atheist, Morbid Angel, Obituary versus Pestilence, Napalm Death, Bolt Thrower etc). But every month was very important back then. It was like a chase - who does it first and worst (in a good way).
Deicide had a lot of components that made them appealing to me - fast, ripping and catchy music (I really liked the juicy sound and drumming), damn great vocals (which were untypical at that time, sometimes sounding like a demon) and finally visually great band photos. Later also their satanic themes caught my attention and when I started to understand little bit English I started to translate the lyrics (I think "Deicide" and "Altars Of Madness" were the first ones. And I remember there were no such words in dictionary like Blaspherereion and Crucifixation).
Finally - for me Deicide has always been Black Metal band, even if metal press in the beginning of 90s called them (Satanic) Death Metal. Death Metal was hot cake back then and many uneducated (without the understanding) journalists labeled them Death Metal because they just did not undersatnd the difference and maybe it all sounded the same for them. I have seen Amon (pre-Deicide) interview where Glen Benton called themselves also Black Metal (around 1988/89).
Needless to say that "Deicide" was the very first LP that I had a chance to buy (Spring 1992) (At that time it was a BIG thing, you just had to know the right people to get stuff like that). My first ever CD purchase was "Amon: Feasting the Beast" in March 1993 (I remember it well, even if I did not have CD player, I recorded it onto my tape and listened from there). Side note: my first official band shirt was also "Deicide" in Spring 1992. So it seems Dee-uh-side was quite important band to me.
Listening to the debut album right now, hell I even remember the lyrics and can sing along. 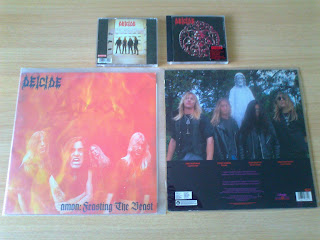 What a great back cover shot "Deicide" album had. I wonder what cemetary it is? Yeah probably somewhere in Florida but I want details.
Posted by deathster at 11:02 AM