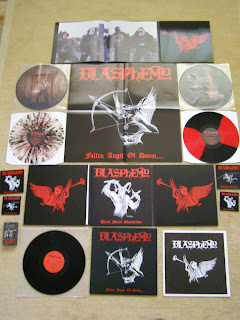 I discovered Blasphemy in 1991 (via tapetrading). I really liked their fast noise. Even more I liked them when I saw their pictures and understood what they had to say a year later (I think I still have the xeroxed album cover from 1992). They are one of my faves ever since! On the top of that I had a chance to speak few words with their singer in Helsinki in 2009. Pretty cool.
On the picture: "Fallen Angel Of Doom" LP (1990), "Fallen Angel Of Doom" re-issue LP/PicLP (2 different sets: PicLP + colored LP). "Blood Upon the Altar" demo (1989). 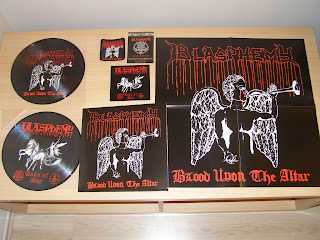