The stench of burning death... Repulsion

F**k, I hope I do not repeat myself too often. What a monster of a recording this Repulsion "Horrified" album is. Originally released as "Slaughter of the Innocent" demo in 1986 and later in 1989 on LP as "Horrified" (on Carcass dude`s label). VERY violent stuff here with strong Master/Deathstrike vibes but even more extreme! I just love when one song ends and then --- PAM! punch in to your face... and wall of noise falls on you again! The best sample songs off the disc would be "Decomposed", "Festering Boils" (it haunts me!) and "Pestilent Decay".... öööaaaaahhhhh!  Criminally under-rated stuff. And how many bands got influences out of  Repulsion song titles?
And there are even rare Genocide (pre-Repulsion) tracks included (from 1984-86) on this double CD re-issue. 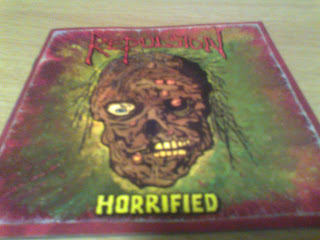