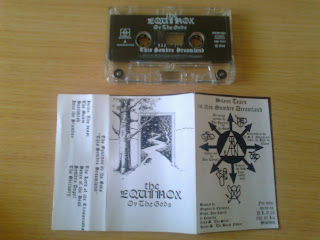 Very cool stuff from Swedish doom merchants: Equinox ov the Gods demo "This Sombre Dreamland" (1994) is not musically extreme like most of the stuff here, but cool neverthless. Its more like doomy metal with rather clean vocals and topics are dark. I remember the mainman Frederik taped me some stuff from 1991 and 1992 too but I cant find it at the moment (there was hit song "Angel Of Death" included).
Demo 1994 tracks:
- Intro: The Beast
- The Golem
- Deathwish
- Into the Slumber
- The Lord Of the Crossroads
- Dance of the Dead
- Sombre Angel
- The Obituary

Their debut CD from 1996 was dissapointing though.
Posted by deathster at 6:53 PM