The Day of Wrath 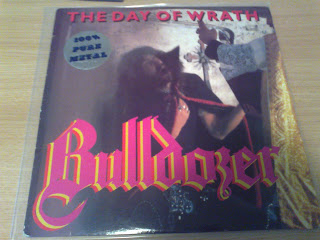 Another Venom worshipping release from 1985 - this time Bulldozer from Italy and their highly ranked debut album "The Day of Wrath". The rumour says that priest was called to the studio (after band had finished the recordings) to re-bless it. I think its true.
I have had 2 copies of this album and always as 2nd hand version, therefore my question: did it came with lyricsheet and insert originally? I never saw insert with this LP although other Roadrunner releases had inserts usually.

Posted by deathster at 8:59 PM