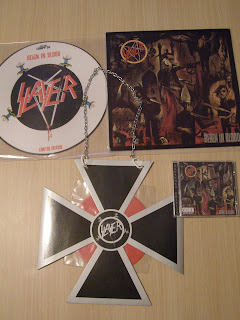 "Reign in Blood" was not the first Slayer album that I heard. It was "Hell Awaits" actually, but its "Reign in Blood" which amazed me the most. Its among my faves ever since I heard it maybe year after its release. Songs like  the opener "Angel Of Death" and "Altar Of Sacrifice" still send shivers down my spine and pump adrenaline to veins. Total energy bomb! I remember back then we discussed with fellow metal kids its not Thrash Metal, its something else. Few years later I got to know term Death Metal. Today its considered Thrash Metal classic, I have to agree with it 100%. The best Thrash Metal album of all time for me.
On the picture: "Reign in Blood" PicLP (UK-version), "Reign in Blood" LP (1986), "Criminally Insane" 7"EP w/ "Iron Cross" & chain, "Reign in Blood" CD re-issue.

Posted by deathster at 6:29 PM