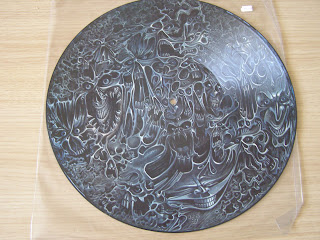 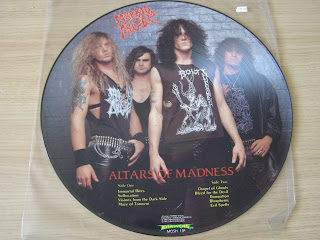 Death Metal classic from 1989. Unfortuantely vinyl version of the album is missing great ancient track "Lord Of All Fevers And Plagues". Back then CDs were pushed by labels and had bonus tracks which were not included on vinyl versions.
On this old PicLP there are some xtra messages etched onto the vinyl:"Fast enough Borivoj? Watch out for Terrorizer". First being known scene specialist since the early days and latter probably pre-warning to Terrorizer "World Downfall" album.
But if I had to pick up four fave tracks then it would be these: Visions From the Darkside, Maze of Torment, Chapel of Ghouls and Evil Spells.
Posted by deathster at 2:00 PM