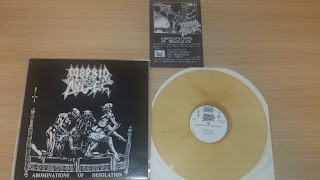 What a monster of a recording this is. Black Death Metal at its best (in my all time Top 10 of albums for sure). Damn I was happy when I got this very same album in late 90s... I think I traded it with Burzum "Det Som Engang Var" CD (Cymophane Rec. version) I still do not regret it a bit. Although I have to admit I am little bit confused with editions of this bootleg album. This one is "glow-in-the-dark" version, I am not sure if this is the 1st version of this bootleg to be honest. I kind of lost track. Supposedly Satanic Records from Japan, but maybe Nosferatu Rec. from Italy (at least they distributed this in Europe). Nevertheless, music rules on this one and thats all that counts. I do have official Earache version too but these are not 100% identical. Have you noticed the difference(s) too?

"... We all are fans, and we feel great to be the makers of this, cuz we know it had to be done. We all know that the "Abominations of Desolation" days will never return but in our minds, in our souls, everytime we`ll play this immense, monumental album, the "Abominations of Desolation" band will live forever! And now close your eyes and descend into darkness... IA, IAK SAKKAKH, IAK SAKKATH..."
Posted by deathster at 11:29 AM