What name comes first to your mind if I say (East-European or) Czech Black/Death Metal? Törr? Root? Tudor? Well, then I would say you are "newbie" and probably discovered Black/Death Metal scene in very late 90`s or early 00`s. But if it is MASTER`S HAMMER name that you spit out immediately (without hesitating a second) from your mouth then you are probably an oldie from early 90`s. Which case is better? If I only knew it myself. Anyway, yeah.... godly Masters Hammer who ruled (and still does) with their demos and 1st 2 studio albums. 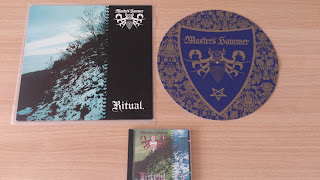 Yeah.... original CD version of  "Ritual" album has even 2 bonus tracks. One of the few cases where CD is even more interesting than LP.