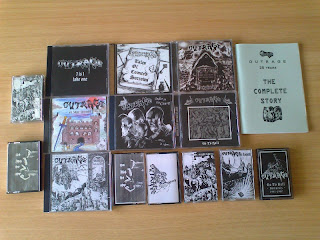 OUTRAGE - Ancient Black Metal band from Pforzheim/Germany (not to be confused with Japanese Outrage!). Their first period existed in 1983-88 and in 2004 they reformed and are back for attack. What I like most about the band is those ripping riffs and Frank´s "The Voice of  Hell"  torture of the microphone. Also the artwork of their releases are quite interesting, seems like they have some continuos story to tell (I mean old demos and first CDR releases). Some of their hits are immortal black/thrash metal anthems ("Go to Hell", "Slave Trader", "Astaroth" etc). Lot of their stuff is DIY, maintaining special underground feeling and touch. I hope one day I can hold Outrage vinyl in my hands.
On the picture:﻿
Demo I 1985
"From Nightmares and Myths" demo 1986
"Back for Attack" CDR 2004
"A Mute Reminder" CDR 2005
"7 is Take One" CDR 2007
"Tales of Counted Sorrows" CDR 2006
"Order in the Court" CD 2008
Demo I 1985 re-issue
Demo II 1986 re-issue
"From Nightmares and Myths" demo re-issue
"The Book of Seven Seals" demo re-issue
"Conspirator" CD 2010
"Go To Hell" CD 2011
"Go To Hell - Demo(n)s 1985-87" compilation tape  #2/20
Outrage "book" with Outrage history, pictures, outtakes, flyers etc. Yeah, they played live with POISON in 1985!
Posted by deathster at 5:38 PM